*raido being Japanese for “ride”

Cycling an Ancient Road from the Sea of Japan to Kyoto

You may have heard of the Nakasendo – the old road connecting Kyoto and Tokyo, or the popular pilgrimage route known as the Kumano Kodo, but how about the Mackerel Highway?

In the Footsteps of Emissaries, Fishmongers, and Elephants

This ancient network of roads, known in Japanese as the Saba Kaido, connected the former capitals of Nara and Kyoto to the once bustling international seaport of Obama. There’s not a lot of bustling going on now in this quiet fishing town, but long-ago Obama’s protected harbor was a major gateway for ships calling from the Asian continent and beyond.

These roads from the coast to the capital served as a conduit for ideas, beliefs, innovations, and aesthetics that would help shape Japan’s complex culture over the centuries. They were traveled by Buddhist emissaries, samurai lords, fishmongers, peddlers of sea salt – and even a poor, homesick elephant.

However, as they were used primarily for transporting seafood - especially salted mackerel - from the bountiful Wakasa Bay, they were eventually branded the “Saba Kaido.”

Today these roads have been granted National Heritage status, and some segments of the old route can still be hiked in their original, unpaved condition. Check out Walking the Saba Kaido for an account of my adventures walking from Obama to Kyoto.

In this article, I’ll relate my one-day bicycle journey along the Mackerel Highway, and give you some tips if you care to take this raido yourself someday.

My preferred route for both walking and cycling is called the Harihatagoe. Being the most direct, it is also the most mountainous, and thus retains segments of the original trail. These segments of hiking trails are joined by an old, narrow paved road that winds up and down the passes and through the verdant valleys. Besides providing a constant background of gorgeous scenery, this route is completely free of Japan's notoriously harrowing tunnels, and relatively absent of automobiles.

A Road from the Present to the Past

Being an Obama resident myself, I depart from the ocean end of the Saba Kaido, but you could just as easily set out from Kyoto. If you do, just be ready to climb the infamously steep Hanase Pass. From the Obama side, the climb is more gradual.

Regardless of where you begin, make sure to be adequately prepared. The Harigatagoe is not only a road that connects Kyoto to the sea, but also the present to the past. You’ll be lucky to find so much as a vending machine for most of the route. And don’t count on having cellphone reception for most of the journey either.

Carry plenty of water and snacks, a tire repair kit, and anything else you think you might need. Also keep in mind that the temperature drops considerably in the higher altitudes, so you may need an extra layer for the long descents.

Heading out of town on a crisp October morning, I begin following the sparkling Onyu River upstream. A few notable shrines and temples flank the ancient route, a testament to this port town’s contribution to the transmission of Buddhism in Japan. I stop at Wakasahime Shrine, famous for its majestic “Sennen Sugi” - a thousand-year-old cedar - and say a little prayer for a safe journey.

Climbing towards the distant mountains, over which the morning sun blazes, I am easily overtaken by a troop of youths on expensive-looking road bikes. Before I can ask them from whence they came, they have already disappeared around a bend. Then along comes a straggler, and takes the time to smile and wish me a good morning as he sails by.

Continuing along the river, past the charming hamlet of Shimonegori with it steeply gabled roofs, I come to a leg-burning series of switchbacks that will take me up towards the now deserted hamlet of Kaminegori.

On the way, I catch up with my fellow Saba Kaido riders while fixing a flat. The straggler, who is the friendliest of the group, greets me as I pull up. It turns out they belong to the Doshisha University Cycling Club. (Doshisha is a prestigious private University in Kyoto.)

These students rode a train yesterday to Komatsu, just south of Kanazawa, and have been peddling non-stop along the coast since 9 pm last night. This would explain their expressions of utter fatigue. They undergo this austerity every year, I am told, each time along a different route.

“Why would you do something so crazy?” I inquire. To which they all just shrug their shoulders and grin. Youth knows no pain. 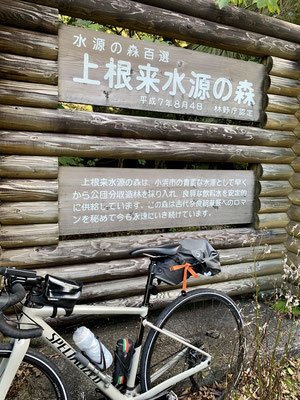 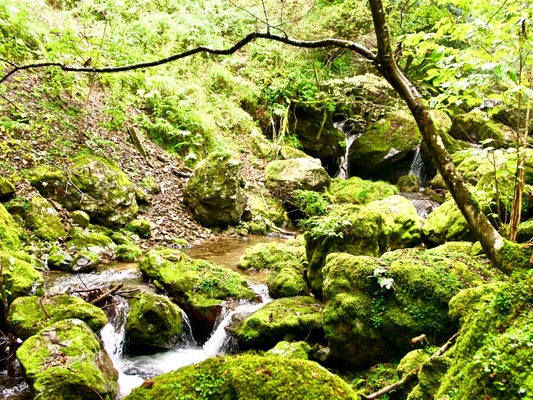 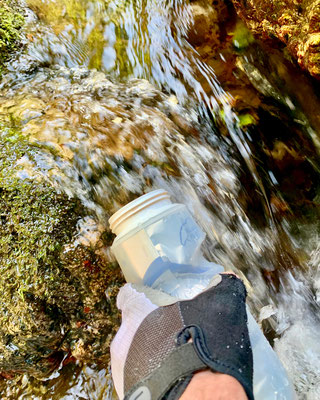 Drink at your own risk.

I continue my zigzagging ascent to the ghost hamlet of Kaminegori. This former settlement is made even more eerie by the fact that its former inhabitants, who have long since migrated to the town below, continue to maintain the old buildings and grounds.

I come to a sign by a bridge describing the stream that flows beneath it. Its source is a sacred spring whose history goes back to the Nara period, from what I can decipher. I hike upstream to take my chances where the water runs fast and clear, and top off my bottle with the sacred nectar. 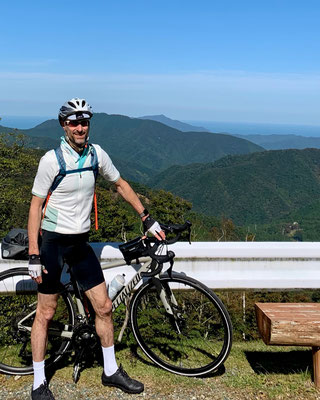 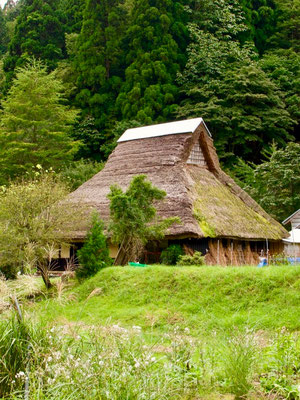 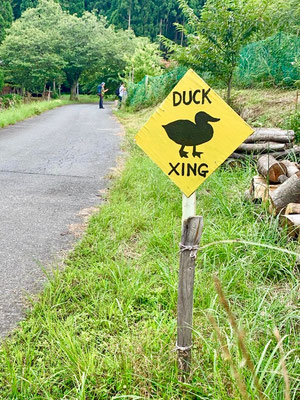 The author posing from the pass. The Dharma Samga Zen Retreat. Make way for ducklings.

I meet up with the Doshisha Dudes again at the pass, snacking on rice cakes and candy. The friendly one and I take turns photographing each other, with distant mountains receding into the background. It’s a bright sunny day and the perfect temperature for a ride in the country.

A thrilling rollercoaster descent drops me into the village of Onyudani. This charming little settlement, along the banks of the Harihata River, is full of surprises. The first is a sign warning of ducks crossing. The duck is the pet of Haruya Guesthouse, a cozy AirBnB that offers food and lodging to wayward Saba Kaideros. The friendship between 'Tora' the duck and the family dog is well documented on instagram.

Just down the road is the Zen retreat Dharma Samgha, a straw-thatched, converted farmhouse which offers intensive training to lay followers. From there you come upon a tiny bakery that, according to the sign on the door, is open for business a mere 50 minutes a-week. Life in the slow lane down here in Onyudani - as slow as the lazy Harihata River that flows through it.

At the edge of town stands an impressive shrine ensconced within a stand of centuries-old cedars – evidence that this quiet hamlet was once a busy waypoint on the old Saba Kaido.

The ride to Kuta is a pleasant, gentle descent along a narrow road flanking a sparkling river, with the picturesque backdrop of the Japanese countryside rolling by. I glide along while quaint hamlets fade in and out, and farmers whose ancestors have worked this land for centuries pause from their labor to regard the Lycra-clad foreigner, grinning at them from his gleaming steed.

Kuta too is a charming little settlement, and the final one before you begin climbing Nomi Pass. Here you must take care not to miss the turn – as I did – and end up riding an extra half hour before turning back where the road abruptly transitions into a logging track. You’ll want to take a hard left before you leave the village, up a very unlikely and unmarked narrow road. (Be sure to download the GPX file of the route here or at the end of the post).

Nomi Pass is another leg-burner, with not much in the way of scenery other than the ubiquitous cedar forest and babbling brook. Eventually you come to highway 38, which is a bit busier and wider than what you’ve gotten used to. The scenery also becomes a little more ordinary, but you will still be riding abreast a shimmering river in the quaint Japanese countryside.

By the time your legs have fully recovered from the last climb, you begin the slow gradual ascent up the third and final pass: Hanase. This last climb begins as a deceptively gently grade, but then steepens exponentially – like a graph of the Japanese national debt – as you get closer to the top. Around now your legs will likely be crying out in pain. But just tell them that soon it will all be over and they can pretty much coast all the way to Kyoto. 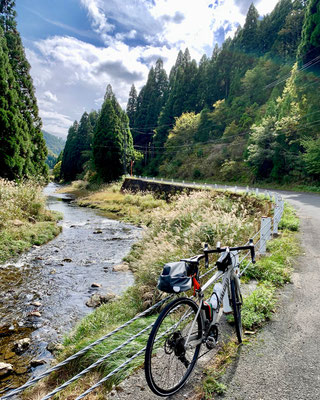 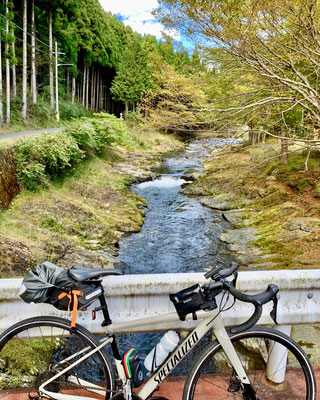 At the bottom of a series of hair-raising hairpin turns,  you’ll find Kurama Onsen. Day-trippers are welcome and, if you brought a change of clothes, you could enjoy a nice soak before coasting into town, or bagging your bike and hopping on a train at the nearby Kurama Station.

I recommend taking a slight detour from the main road to pedal leisurely through the tourist town of Kurama, thereby bypassing the several-kilometers-long tunnel on the main road.

Look for the Lawson’s on your right, the first convenience store since Obama and a welcome site for the weary cyclist. I pull into the parking lot and who do I encounter but my companions from the Doshisha Cycling Club. They are exhausted but elated, having entered the home stretch of a 20-hour marathon ride. By this time we are all buddies and exchange Instagram follows and farewells.

A pleasant ride along the bank of the Kamo River brings you to a stone monument bearing the inscription 鯖街道口 – Saba Kaido Guchi, or “Gateway to the Saba Kaido” – an excellent selfie opportunity. You’ll find it along the western bank just above the “Y” where it intercepts the Takano River at Imadegawa Street.

As a denouement, duck into Demachiyanagi, the historic destination for porters of the Saba Kaido bringing their salted fish and other seafood products to market. You’re sure to find products for sale that still originate from Obama and Wakasa Bay.

After dinner in town with old friends, I sprint down Horikawa Street to Kyoto Station. The train from Tsuruga to Obama is a local line, and I need to arrive in time to catch the last train.

I stuff my bike into its rinko bag and jump on board just as the doors clap shut.

Next time, maybe I'll spend a night in Kyoto and return by an alternate route. Whatever I do, I’ll keep a record of it and post about it here. In the meantime, send any questions or comments you might have. And be sure to leave your email in the contact form if you'd like to be kept up to date on the latest from Sabakaido Traveler.