Behold, that which is greater than thyself!

Imagine if you will, a Western civilization in which the animistic rituals of the ancients still coexisted in harmony with the teachings of Christianity.

What if evergreens, bunnies, maypoles, and Jack-o’-lanterns still held their original symbolic meaning? What if temples to Aphrodite and Apollo were wedged between skyscrapers, with commuters pausing for an offering and a prayer before dashing underground to catch the metro? What if millennia-old dances and rituals were passed down year after year in remote villages?

Imagining such a scenario may give you some insight into Japan’s complex spirituality and extraordinary festivals.

Buddhism was introduced to Japan in the middle of the sixth century, a century and a half after Emperor Theodosius had banned the Hellenic religion in Rome. While this imported religion was not unanimously embraced by the clans supporting the imperial court, it eventually gained acceptance and was practiced alongside the indigenous religion of Shinto.

A syncretic faith combining the two religions – known as Shinbutsushugo – took shape and dominated religious life in Japan for over a thousand years. Temples and Shrines often occupied the same grounds, and many priests performed both Shinto and Buddhist rites. This was brought to an abrupt end in 1868, with Emperor Meiji’s edict separating Buddhism and Shinto.

Shinto, which had hitherto included a diversity of regional rites and beliefs, was declared the state religion and homogenized. Its shamanistic aspects were considered too “primitive” for a modern, internationalized country, and were banned. Yamabushi mountain ascetics were forced underground, and the once powerful women shamans, known as miko, became the benign shrine maidens we see today – performing menial tasks and selling amulets.

Thousands of Buddhist temples were relocated, torn down, or burned, and priests were forced to choose one religion and abandon the other. However, in the hearts of many Japanese, the syncretism of these two religions lives on. Jingu-ji, a temple in Obama, Fukui - whose name literally means “Shrine/Temple”, miraculously survived this period and displays a Shinto Shrine within its main hall. Here, one can simultaneously worship both Buddha and kami.

Another vestige of Shinbutsushugo is the Shinto/Buddhist ceremony known as Omizu-Okuri (Water Sending), held at Jingu-ji every March 2. This is the preparatory ritual for the Omizu-Tori (Water Receiving) which takes place 10 days later at Todaiji Temple in Nara. The two rituals demonstrate the close ties maintained between Nara and Obama since Japan's earliest recorded history.

Their origin is enshrouded in myth. When the great Buddha statue of Todai-ji temple was completed in 752, all the gods of Japan congregated in Nara to celebrate. The deity of Wakasa, however, was preoccupied with fishing and missed out on this important occasion. By way of apology, he sent water from a sacred spring located within Jingu-ji via a mythical underground river.

This tradition has been carried out for 1300 years. For the second year in a row, the ceremony was off limits to the public. I was fortunate enough to attend, however, thanks to the participation of the Obama Tourism Bureau where I work.

The head priest of Jingu-ji acts as master of ceremonies, and is aided by a group of yamabushi. Yamabushi are also known as shugenja, or practitioners of the Shugendo sect. As mentioned above, this hybrid sect was banned during the Meiji Restoration. What remains of this tradition today is largely due to the efforts of past priests, who clandestinely transmitted the ancient rites from generation to generation within families.

This fascinating sect deserves more explanation that I can give in this article, but fortunately writer and shugenja Alena Eckelmann covers it extensively in several articles, beginning with this one.

A Portal into Another World

The yamabushi ascetics make a grand entrance, proceeding through the main gate and up into the temple, sounding their conch shells and brandishing an array of religious accoutrements. Within the main hall, the sacred rite begins with the chanting of Buddhist sutras and Shinto prayers. It reaches its climax with monks vigorously waving huge torches, showering the interior and the onlookers with sparks.

Outside, the temple grounds are illuminated by torchlight and the theme of fire continues. Branches of cedar have been stacked high in a large mound awaiting to be set ablaze. The tension mounts amidst more chanting and praying, and an elaborate performance ensues involving symbolic implements of war to ward away evil spirits.

At last, the mound of evergreen bows – or goma – is ignited. It smolders and glows, with dense smoke engulfing and purifying the crowd, and suddenly erupts into flame, illuminating the surrounding forest with its intense light. Fire is a portal into the other world. Sutras chanted before the flames, or prayers written on pieces of wood to be burned, will rise in smoke to reach the ears of the Buddha and the gods. 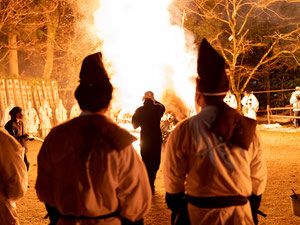 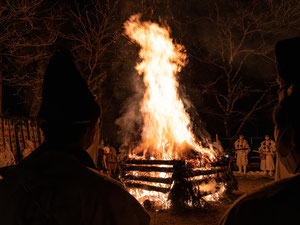 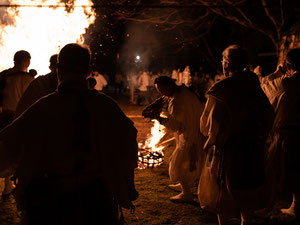 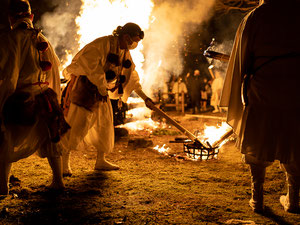 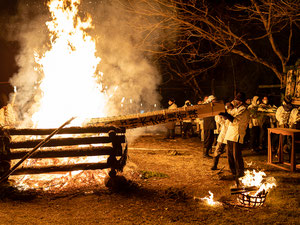 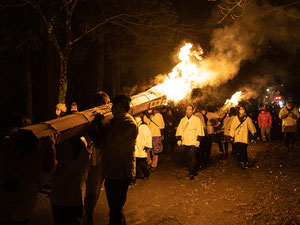 When the fire has subsided enough to be approached, the lay participants, like myself, assemble in their groups to receive their otaimatsu. These bundles of planks, measuring about four meters long, are hoisted onto the shoulders of three to five participants and extended into the fire to be ignited at one end. They will then be carried two kilometers to the sacred site of Unose, where the water drawn from Jingu-ji’s spring is to be poured into the churning waters of the Onyu River.

Where Alph, the sacred river, ran

Through caverns measureless to man / Down to a sunless sea.

Perhaps Cooleridge, in his opium-induced slumber, had dreamt of the Omizu Okuri and the sacred Onyu River. On the numinal plane this river flows into the Sea of Japan. But, in the spiritual realm, these waters run through caverns measureless to man, down to Todai-ji Temple in Nara. There the gift of Jingu-ji will be drawn from the Wakasa Well in an equally holy ritual.

It is difficult to describe what I witnessed that night, while hunched with my camera on the shore opposite this spectacle. Revisiting the site the following day, I couldn’t believe that this narrow stream was all that had separated me from what had seemed like another world. And when I tried to remember what had happened, it came back like a distant dream.

Hopefully, the photos will do a better job of conveying this phenomenon than my words. After the sending of the water is completed, the second goma continues to rage. The heat and light are so intense that even the shugenja gathered around it must turn their faces away from the flames. Certainly, no evil could survive such heat.

Gods and Buddhas continue to walk hand-in-hand. And we mortals return to our everyday lives cleansed and restored, having glimpsed something greater than ourselves.

Interested in attending the Omizu Okuri yourself? Leave me a note and your email address in the contact page, and I'll see what I can do to arrange it.